For years, coral reefs around the world have been devastated by mass bleaching events as the oceans continue to warm due to climate change. Corals stand little chance of bouncing back from these events — but a new study suggests they have an unusual survival method: taking on a vibrant neon color.

When bleaching events occur, extended heat spikes cause corals to turn a ghostly white, often leading to their death. But “colorful bleaching” has the opposite effect: the dying corals gain more pigment, and glow in shades of bright pink, purple and orange.

Scientists first spotted the mysterious neon coral a decade ago, but they had been unable to figure out why it occurred. This study, published Thursday in the journal Current Biology, suggests the corals change color as a last-ditch effort to survive.

Coral animals symbiotically coexist with tiny algae, providing them with shelter, nutrients and carbon dioxide in exchange for their photosynthetic powers. Even slight increases in annual ocean temperatures can wreak havoc on this relationship, expelling the algae from the coral’s tissue and exposing its white skeleton. After the coral is exposed, it often breaks down and dies, altering the ecosystem for the diverse array of life that relies on it.

Researchers at the University of Southampton’s Coral Reef Laboratory studied 15 colorful bleaching events worldwide between 2010 and 2019 — including one in the Great Barrier Reef, the world’s largest coral reef system — and recreated those ocean temperatures in a lab. They found that colorful bleaching events occur when corals produce “what is effectively a sunscreen layer” on their surface to protect against harmful rays and create a glowing display that researchers believe encourages algae to return.

The Ocean Agency describes the process as a “chilling, beautiful and heartbreaking” final cry for help as the coral attempts to grab the algae’s attention.

“Our research shows colorful bleaching involves a self-regulating mechanism, a so-called optical feedback loop, which involves both partners of the symbiosis,” lead researcher Professor Jörg Wiedenmann of the University of Southampton said in a press release. “The resulting sunscreen layer will subsequently promote the return of the symbionts. As the recovering algal population starts taking up the light for their photosynthesis again, the light levels inside the coral will drop and the coral cells will lower the production of the colorful pigments to their normal level.” 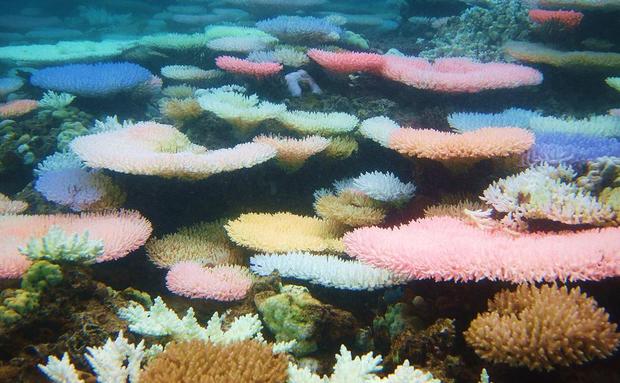 Coral reefs support more species per unit area than any other marine environment, including about 4,000 species of fish, 800 species of hard corals and potentially millions of other undiscovered species, according to the National Oceanic and Atmospheric Administration. Disruptions to coral reefs have far-reaching implications for ocean ecosystems.

It’s not just warming oceans that cause colorful bleaching. Researchers say changes in nutrient levels within coral reefs due to fertilizer run-off from farms also lead to bleaching events — a problem that can be fixed at the local level.

Experts believe only coral that has faced mild or brief disturbances, rather than extreme mass bleaching events, can attempt to save itself using this process. These corals can still undergo some of their normal functions for a short period of time as they hope their algae come back — whereas drastic changes in ocean temperature almost always lead to coral death.

Reports of colorful bleaching during the most recent mass bleaching event in the Great Barrier Reef in March and April gave scientists hope that patches of the system have a chance to recover.

“Bleaching is not always a death sentence for corals, the coral animal can still be alive,” said Dr. Cecilia D’Angelo, a molecular coral biology lecturer at the University of Southampton. “If the stress event is mild enough, corals can re-establish the symbiosis with their algal partner.” 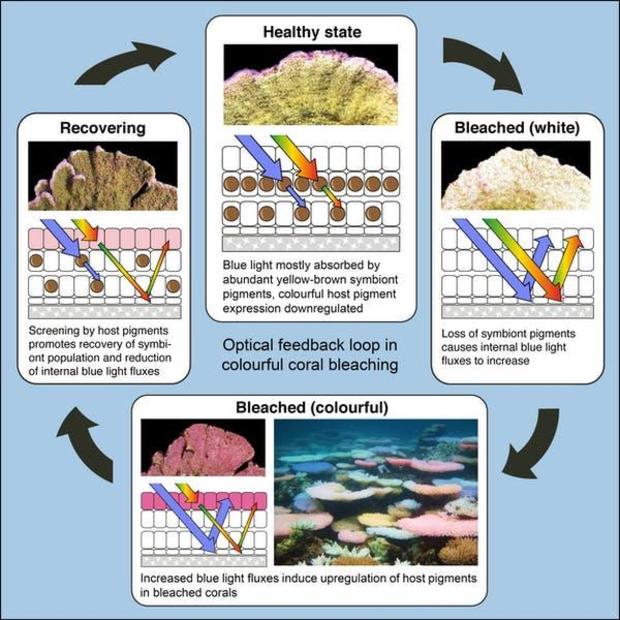 Bleaching events used to be few and far between, but they now occur nearly every year. In 2017 alone, nearly half the corals on the Great Barrier Reef died — and experts say we are running out of time to save them.

Scientists emphasized that while colorful bleaching is a good sign, only a significant reduction of greenhouse gases globally — in addition to improvement in local water quality — can save coral reefs beyond this century.

“Now that we know that nutrient levels can affect colorful bleaching too, we can more easily pinpoint cases where heat stress might have been aggravated by poor water quality,” researchers said. “This can be managed locally, whereas the ocean heat waves caused by climate change will need global leadership. Together, these actions can secure a future for coral reefs.”